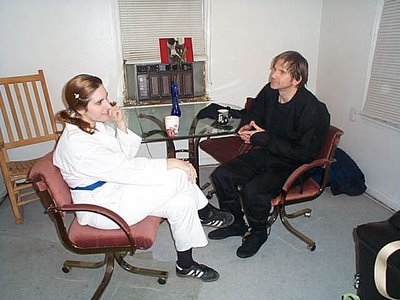 In this scene from "Date Number One" Karate woman Anne (played by Julia Stemper) chats with her date Ninja man Mark (played by John Stabb Schroeder) at her place before the two head out for the night.
PHOTO COPYRIGHT 2005 SUJEWA EKANAYAKE/WILD DINER FILMS

Yup, that's right, my new comedy feature Date Number One will be playing at the cool Seattle indie film venue Northwest Film Forum (or, as it is known on some shady street corners: NWFF) the weekend of May 19 - 21. 6 shows are scheduled, and hopefully this will be the first of many Seattle engagements for this flick. Reviews, stills, maybe a trailer, additional play dates, benefit screenings info, an updated website are all coming in the next couple of weeks.

If you are a indie film/art/culture blogger type person or a film booker type person for an indie film venue, let me know if you want to see a screener DVD for the film. I am going to have a batch of them available Thu 2/16.

For people who've already requested a screener months ago, fear not, they will be on their way to you next week. Hopefully the film will be good Valentines Week entertainment for ya.

I am going to start submittin' the flick to film festivals late next week. Gotta update my Withoutabox account & see what neat festival deadlines are rolling up. I know I will be submitting to Chicago Underground and Los Angeles Film Fests. I am going to try to play as many festivals as possible.

All the ultra-low/"no" budget indie/D.I.Y. distro adventures will be chronicled in sweet detail at the movie's official blog.

Thanks, and start putting some nickels & dimes in a piggy bank so that you can catch a showing of Date Number One when it plays in your village or in case you want to fulfill that burning, unstoppable desire to buy the DVD.

Very Cool. OK, to go public now? Can't wait to get the screener.

Sujewa Ekanayake said…
Thanks LC. Yeah, OK to go public.
You'll have the screener there this coming week. Thanks again for all the support, talk to you soon.