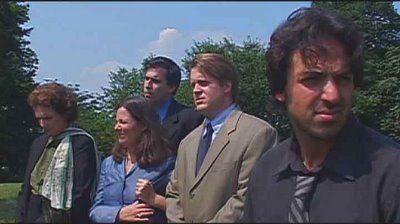 Photo Courtesy SEPTEMBER 12TH Website
*
I received an e-mail today from the producer of the film and now I know about the existence of "September 12th". The film's website says: "set in New York on the third anniversary on 9/11, September 12th is a powerful drama about memory and those left behind". I requested a DVD so I can watch the movie and blog about it. Here's a little bit of what Film Threat has to say about the movie:

"While Oliver Stone and many other big wigs in Hollywood prepare their big budget, star studded spectacles tackling that horrible day, in comes “September 12th”, a heartfelt exploration in to a family’s grieving of their daughter. Touhey’s approach toward the story harkens back to “Moonlight Mile”, resembling many of its themes and plot point, but “September 12th” deals with how death can in many ways alter our perception of a loved one in more ways than we know. It can erase all the bad memories and faults they had and set in our consciousness a denial that in many ways lasts forever. “September 12th” is a dark elegy about how we perceive our loved ones, and how sometimes we choose to perceive them, but it’s also a truly unique drama about tragedy that even touched a nerve on a few occasions."

Film Threat highly recommends this award winning (Best Feature, Long Island Film Festival 2005) movie directed by John Touhey. I am looking forward to seeing it. The DVD can be purchased here. So far the film has been screened at several events and venues, including the Anthology Film Archives in NYC.