The Proper Care & Feeding of an American Messiah 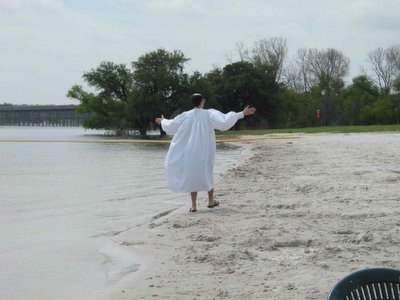 Unlike Jesus - the most famous messiah in my part of the world, Brian - the messiah in Chris Hansen's pseudo-documentary The Proper Care & Feeding of an American Messiah does not have a large following. In fact his followers at the beginning of the film consist of just two people, his brother and sister - two people who, due to their birth relationship, probably could not stop supporting Brian the messiah even if they wanted to. Increasing the number of his followers is one of several objectives Brian the messiah tackles in his own laugh inducing, under-prepared and ill-informed way during the course of the movie. Now, if you are religiously inclined, you may be moved to whisper to yourself at this point that a movie making fun of the messiah concept may be a bad idea. However, Brian the messiah repeatedly states, when faced with such questions regarding the validity of his messiah claim by various characters in the movie, that he is not THE messiah but A messiah, a regional messiah. Trust me, this messiah offers no real competition to Jesus or for that matter to other more ordinarily human religious leaders of ancient or modern times. Brian the messiah also adds that the federal government had a role in him discovering that he is the messiah for the 100 mile area starting at the center of the town. Messiah was filmed in part in Waco, Texas. And judging from the closing credits of the movie, it was made with the support of the local government and various businesses and residents. Perhaps Waco is attempting to distance itself from the grim spectacle of the David Koresh/Branch Davidian tragedy. At least they seem to have a sense of humor. So who is this regional messiah that hails from a town in Texas? What is his mission, what problems will he have to overcome, what adventures will he take us on?

Brian the messiah (Dustin Olson) is a thin, balding, possibly middle aged man who looks like an older Neil Patrick Harris. As Brian the messiah Olson even sounds a little like Harris. Or perhaps I've seen too many episodes of Doogie Howser, MD. Brian the messiah lives with his wife Cecelia (Heather Henry), brother Aaron (Joseph Frost) and sister Miriam (Ellen Dolan). Those three characters appear to be in their later 20's or early 30's. Brian's brother is not too bright. Brian's sister worries a lot, looks out for her brothers and does not speak much. Brian's wife is happy that he pays the cable bill. Brian seems to get along pretty well with his wife, except when she interrupts his "messiah time", which I think lasts from 3-5 PM or something every day. Brian believes that he is descended from a long line of messiahs - except that his father and others may not have claimed their messiah identities and perhaps suffered because of that mistake. Brian also believes that he has special powers and is able to perform miracles. One funny scene shows Brian performing a "miracle" called the Miracle of the Fruit. Brian wonders what grand mission he should undertake, and what plans God has for him. Other then sending vibrations of peace through the town, shouting unwanted advice at pedestrians at a street corner, reflecting on the possibility that his mission in life could be to help heal people's stomach pains, Brian the messiah does not have a solid idea about his divine purpose. But as the film gets close to Act II, a way is found to help discover God's special plans for Brian.

Brian's sister Miriam insists that Jesus did not have a posse and that his followers were known as apostles, but Brian claims that a posse is the modern version of apostles and that he may be able to get some and discover his true purpose if he held a grand celebration to announce his existence. Thus a plan is hatched to rent the town hall, have a rally to announce Brian's messiahship, introduce himself to "his people" and create an opportunity for God to tell Brian about his special mission. Two major problems confront Brian and his siblings when it comes to holding the rally: coming up with the rental money for the town hall and coming up with the money to buy a large quantity of specially designed t-shirts. Brian believes that t-shirts aimed at kids will reel in families to his ministry. Brian decides to raise the necessary cash by performing messiah services for hire: baptisms at a lake, praying away unwanted guests and similar tasks that call for his unique gift. The degree of success achieved by these fund raising schemes lead us to two surprising developments at the end of the movie.

The rally does happen and it changes Brian's life in a completely unexpected way. By the end of the movie it became clear to me that even though Brian the messiah may be massively deluded, he is uncritically loved and supported by his family. That is perhaps as good as any divine gift or special designation that can be had by one of us mortals.

Extras:
Trailer
See another still photo from this movie here
Read another review of this movie at The Chutry Experiment

Excellent review. I assume we can get a DVD copy from their website?

Anonymous said…
So glad you liked the film, Sujewa. We were blessed with great actors, an enthusiastic crew, and a hot hot summer (okay, not everything was wonderful!).

If you have any questions at all about the film (or if any of your readers are interested and want to ask, I'm glad to answer questions here....

Sujewa Ekanayake said…
All of the comments above were in the system but I didn't know about them, weird, usually Blogger lets me know. Anyway, here they are, sorry about the delay all.

LC, I am sure Chris H. will let people know about the DVD availability through the site. Probably will not be for a while though, since the flick is just enterting the festival stage.
E-mail Chris to be sure.

Thanks for the comments all, talk to you soon.

Anonymous said…
Regarding DVD availability, you're right. We haven't made them commercially available yet because we're trying to get more festival rejections first - er, I mean, get into a few more fests and perhaps get distribution.

Yeah, so as you can tell from my comments above, several fests have either rejected us, announced their lineup without us, or seem to be notifying people today and, well, I haven't gotten any emails or phone calls today. So I'm feeling a little (actually a lot) frustrated.

It does make me feel a little better that people actually want to see it...
7:03 PM

Festivals are just a handful of people making decisions on movies based on various factors such as selling tix, maintaining a certain identity for the fest, etc. So not all films will be compatible w/ fests, even if they are excellent. And don't forget that many movies that are loved by festival programmers do not get much love from the non-festival audiences in the wider world. And even if all the fests reject you, you can still send DVDs out to be reviewed by people like Film Threat & make the DVD available for sale via mail-order, etc. & you can think about theatrical self-distribution. OK, good luck.
12:23 AM